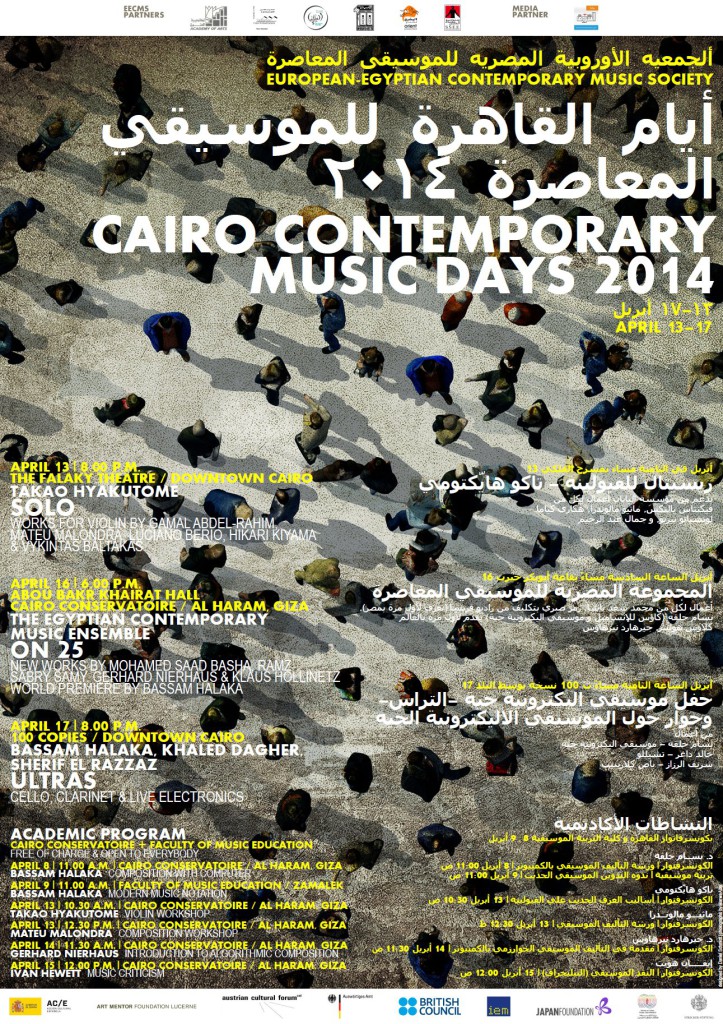 DEAR MUSIC LOVERS,
the Cairo Contemporary Music Days are back in 2014 with a very dense edition, featuring almost exclusively Egyptian premieres and several world premieres as well as a rich academic program with illustrous international hosts. In the light of the challenges posed by political shifts and the renewed unrests during last summer, it seemed wise to condense the scope of events presented this spring to just a few topics and to hold several of the other events planned for this year in a seperate context next season (including the muchanticipated second part of our UK Contemporary Composers Portrait series and a series on women in contemporary music). The result is a short, intensive program with a strong focus on the role of electronic appliances in contemporary music: electro-acoustic music, live electronics and composition with computer. Composers and electronic music specialists Bassam Halaka, Gerhard Nierhaus, and Mateu Malondra, who has already been a part of the first Cairo Contemporary Music Days in 2011, will share their insights in the course of our academic program. Their works (including world premieres by Halaka and Malondra) will be performed in the course of three concerts – each different in formation and musical language – along with other exciting contemporary pieces. We are especially obliged to Bassam Halaka for the intensive cooperation with the Egyptian Contemporary Music Ensemble and the festival as composer, performer and lecturer. Furthermore, with a lecture by renowned music critic Ivan Hewett, this festival edition marks the beginning of a new EECMS music criticism series. While the majority of works presented here has been created between 2012 and 2014, we would also like to pay homage to Gamal Abdel Rahim in the 25th year since his passing away, and raise the question about the influence of his school and the role of composers in our societie(s), with a performance of his “Meditation” on Sunday. The present edition of the Cairo Days is the starting point of several promising new cooperations – with notable international partners as the Institute of Electronic Music and Acoustics in Graz, Austria, and the Majorcan ME_MMX Festival on the one hand, and several exciting new locations in Cairo on the other – thus hopefully reaching many new listeners. Lastly, we are happy to announce the production of our second ON 25 CD this spring! The recording will introduce several new works by Egyptian composers created in the course of our composition initiative ON 25.
We very much hope that you will share our enthusiasm for the artists, performers and styles introduced in this year’s Cairo Contemporary Music Days! The EECMS Team