Women Composers of Our Times

Anahita Abassi (Iran): No I am not roaming aimlessly  for Solo Flute

2017 has been announced the year Egypt celebrates women and their achievements in all walks of life. The EECMS could not miss such opportunity to celebrate women composers with achievements in the arts scene in different cultures and parts of the world. For that, the EECMS organises a number of events celebrating WOMEN COMPOSERS OF OUR TIMES starting February the 27th of February to the 2nd of March 2017. The Society also collaborates with a number of prominent associations and forums to cover for a wide range of themes, topics and questions related to the umbrella topic of Women, Arts, Culture and Music. The women and Memory forum in Cairo with its fruitful research achievements that have been taking place since 1995 is featured in the roundtable discussion hosted at Goethe-Institut Cairo where researchers intend to touch upon themes related to women in the history of art and the importance of documentation, oral history and storytelling in relationship to the visibility of women composers in different epochs. The roundtable discussion will also feature other artists such as  Huda Lutfi and sherif el Razzaz.

The event on the 27th will feature a very diverse and light music program of women composers: Bushra el Turk (UK – Lebanon), Anahita Abassi (Iran), and Kaija Saariaho (Finland). The works are very different that they manage to show the array of development, progress and change between music generations, cultural backgrounds and nationalities of the women composers that we have.

Her words to the Event, 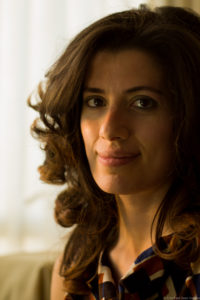 My identity as a female composer of Middle Eastern descent:

From my experience, my identity as a female composer of Middle Eastern descent has both worked for and against me. There are few female composers in the MENA regions, mainly because they are either not publicised enough in the media, or inserted in the canon of artistic MENA history, or that there are not enough female composer role models of Arab descent, often because of the first reason. Ofcourse this is a problem found outside of the MENA region.

As in many societies, a Lebanese woman has to fulfill expectations: primarily marriage and childbirth  Not many understand the particular calling or creative compulsion of being a composer or artist. Wherever I go I face a categorisation and assumption. Both excellent marketing tools but do not serve artistic exploration. Ofcourse being brought up in Britain with close ties to Lebanese society in London and Beirut, I experience alterity in both.

“Women Composers of Our Time.” This landmark event is part of EECMS’s ongoing effort

In 2013, a Thomson Reuters poll found Egypt to be the worst Arab state for women’s rights (http://news.trust.org//spotlight/poll-womens-rights-in-the-arab-world/). Just four years later, the EECMS has collaborated with the Women and Memory Forum to produce “Women Composers of Our Time.” This landmark event is part of EECMS’s ongoing effort to promote new Arab music through commissions, performances, thematic forums, and artist exchanges. Entrepreneurship and personal initiative are as important as ever for professional musicians, but even in the age of the internet, formal organizations such as the EECMS and the ISCM (International Society for Contemporary Music) continue to play vital roles in new music. Thanks to a mix of public and private funding the EECMS is establishing the infrastructure and systems required to identify and support new talent, foster community and opportunity, and engage a variety of audiences.

By Joy H. Calico, Professor of Musicology and European Studies Editor-in-Chief, Journal of the American Musicological Society
the article will be published in the Women Composes of our time´s event book 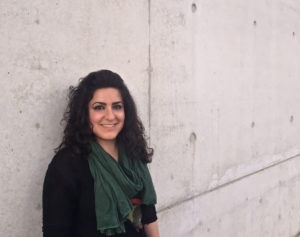 Dialogical Self Theory weaves two concepts, self and dialogue, together in such a way that a more profound understanding of the interconnection of self and society is achieved. Usually, the concept of self refers to something “internal,” something that takes place within the mind of the individual person,while dialogue is typically associated with something “external.”
The composite concept “dialogical self” goes beyond the self-other dichotomy by infusing the external to the internal and, in reverse, to introduce the internal into the external. As functioning as a “society of mind”,the self is populated by multiplicity of “self-positions” that have the possibility to entertain dialogical relationships with each other.

The form and the context of this Dialogue is inspired and shaped based on a poem by Rumi (translation by Farah Aziz) and the sincere definition of Sufism; The search for the center, for the inner state of mystical love; a deeper identity or essential self and the Unity of Being. Sufism is the selfless experience and actualization of the Truth, which involves an enlightened inner being, not intellectual proof; revelation and witnessing, not logic. The practice of Sufism is the intention to go towards the Truth, by means of love and devotion. The truth of Sufism requires reformulation and fresh expression in every age. The Sufi is one who is a lover of Truth, who is eager and persistent, and by means of love and devotion moves towards the Truth, Clarity and the perfection which we are all seeking.

with the friendly support of the Goethe-Institut Cairo